All Israel’s embassies and consulates abroad to close – Could this be a prelude to a strike against Iran?

As you can read below, the stated reason for the closure of ALL foreign embassies around the world is due to a Strike by Union workers in the Foreign Ministry and yet better cover story to get their people out of harms way and not alert Iran that they are planning a strike against their nuclear facilities.

The whole thing seemed kind of scary to me so I thought I would at least send out a food for thought alert.

Foreign Ministry goes on strike, all Israel’s embassies and consulates abroad to close

Services needed for everybody from new immigrants to employers bringing in foreign workers will be brought to a halt. 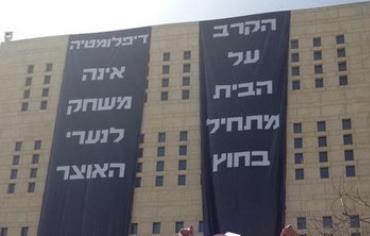 Foreign Ministry’s workers committee declared a full-fledged strike on Sunday, closing the ministry and all the country’s embassies and consulates around the world for the first time.

The strike is the latest development in a nearly two-year-old work dispute that the workers declared for improved salaries and work conditions.

Seven months of mediation efforts exploded on March 4 when the workers rejected a Finance Ministry proposal.